Curious to get inside the mind of his autistic child, a father started capturing his unique quirks and habits on camera.

San Francisco-based photographer Timothy Archibald, turned the lens on his son, Elijah, now 12, six years ago and published the intimate collection of images in a book titled 'Echolilia/Sometimes I Wonder'.

One shot shows the child sat naked on a bed with a giant envelope over his head and another sees him with his face plunged into the mouth of a large plastic funnel.

Other snaps show Elijah undressed and curled in a fetal position on his front door step and later, laying down with a vacuum pipe held to his ear and lips, seemingly in a moment of play…
Mr Archibald, 46, says his photographs have attracted mixed responses.

Some commentators have accused him of using Elijah as a 'human guinea pig' while others have thanked him for spreading awareness about autism, which is often misunderstood.

'Time and time again I get notes and photos from parents who really feel they see their kid in these photographs Eli and I made,' the photographer father told Autism Speaks.

'They see the focus and the haze, the concentration and the dreamy, and seem to relate to the emotional struggle for the parent in the photos as well.'

He says his main aim of the series is to make people more accepting of the 'imperfections' in life.
'[My son] may not be "perfect", but nature isn’t perfect. So let’s accept it, be up front about it, let him be proud of it, and here, let us define it ourselves.'

Mr Archibald said even as a toddler Elijah went 'to the beat of his own drum' but he and his wife, Cheri, didn't think anything was wrong.

However, when their second son grew older and they saw what a non-autistic child was like, they became aware that something was different.

Teachers and parents at Elijah's kindergarten school also picked up on his unusual behavior and started asking questions.

In an attempt to 'gain some control over the situation', Mr Archibald began his photography
project. The father-of-two recalled: 'Like most kids, you can’t really make Eli do something if he doesn’t want to. So he wasn’t very interested in being in the photo alone.

'But if he could collaborate, if he could suggest the pose, the idea the structure, then he was very much into it. That began our process.'

Shortly after starting the photo series doctors diagnosed Elijah with autism spectrum disorder, a condition characterized by difficulties in social interaction, communication and repetitive behavior.
'Though the diagnosis gave me the words and history to understand my son better, it didn't take away the mystery and the need to try to find an emotional bridge to him,' Mr Archibald said and thus, continued snapping away.

He said through doing the three year-long series he got to appreciate his son's quirks and relate to him better. They now look back on the pictures and recall fond memories together.

Explaining why he called his book 'Echolilia', he said: '[It] is an alternate spelling of a more common term, "echolalia," used in the autistic community to refer to the habit of verbal repetition and copying that is commonly found in autistic kids' behavior.

'I liked the idea of it: photography is a form of copying. Kids are a form of repetition. And looking at my kid with photography allowed me to see myself anew.'

The proud father concluded: 'We have challenges. But I do think he and I did form some small tether at the time we made these photographs that seems to help us along.'

My eldest son was born in 2001. He was always a kid who went to the beat of his own drummer. When he was 5, we began making photographs collaboratively as a way to find some common ground and attempt to understand each other. Soon after we began the project, Elijah was diagnosed on the autistic spectrum. Though the diagnosis gave me the words and history to understand my son better, it didn't take away the mystery and the need to try to find an emotional bridge to him...

"Echolilia" is an alternate spelling of a more common term, "echolalia," used in the autistic community to refer to the habit of verbal repetition and copying that is commonly found in autistic kids' behavior. I liked the idea of it: photography is a form of copying. Kids are a form of repetition. And looking at my kid with photography allowed me to see myself anew...

When we collaborate, sometimes I lead, sometimes he leads, but Eli often does something unexpected ... something I'd never have been able to think of. We look at the images together on the digital camera and try to refine them, try to improve them, take them in other directions. I liked the idea of turning creative control over to a child, while I operate the camera… 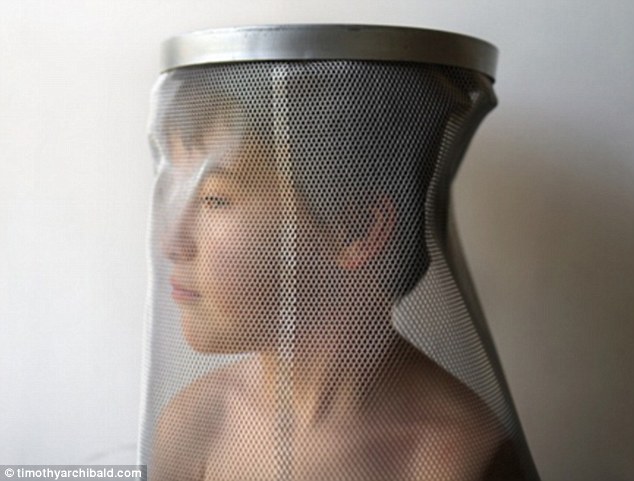 In the late afternoon, the electronic noises start. The beeping of a garbage truck when it is backing up, the sounds of an engine shifting into high gear, the beeping of a microwave oven. The sound is very loud.

"Can you make those noises any softer please?"

No, I can't. That is the volume that the machine creates. It can't be turned down.

"The doors will be closing. Please stand clear of the doors."

"The doors will be closing. Please stand clear of the doors."

Repeated obsessively whenever we encounter a moving door. At the library, on a bus, at the supermarket. It comes from deep within and interrupts common conversation. It's stated as an impulse, not as a collection of thoughts expressed, repeated in exact tone and rhythm without meaning. This is echolilia...

Eli is not what one would think of as traditionally autistic. He has a huge vocabulary, goes to public school, gets good grades. But he is clearly on a different channel...

It was Christmas break and Eli was home from school for two weeks. He had gotten fixated on having fires in our fireplace during that time: the fire, the matches, the kindling, the logs we'd find at a park ... every detail he was taken by, and the ritual of starting a fire was something he repeated and repeated. Around that time he got attached to one of the logs and would not let us burn it. He liked its size, the knobs, the natural handles it had. He suggested we make some pictures with it...

We had a large plastic container in the room and Eli had been playing in it the night before, putting his body all the way into it. I think I asked him if he wanted to make some photographs with it when it was sunny the next day. He started just being in it: standing, hiding beneath it. Then we realized that it could contain him lengthwise if he curled himself up like he were in an egg.

Eli had recently lost a tooth and also had come home with this mask of cut paper. We had been discussing the tooth fairy: Who is she? What form does he or she take? Does she fly? Walk? Is it a boy or a girl? Eli felt she was white, like a tooth in some way, and we made some photographs with the white shirt he had on, white mask, hovering around our backyard fence. We looked at the pictures, and he felt it wasn't really the tooth fairy but us trying to guess at the tooth fairy's shape in a photograph.

For me, these photographs are not of him; they are about a relationship. I always think of that relationship as having three components: him, myself and then the shared stuff that we can't really define. The feeling we get when we look at all the photographs together is the channel that defines the project. That is the echolilia thing.

Courtesy of my daughter
Posted by Galen Breningstall, MD at 4:15 PM